Fly from Nice to Palermo

to get to the crossroads of civilisations

Jet off to Sicily

Just one Nice Palermo plane ticket will take you on several journeys. It will carry you from one shore of the Mediterranean to the other, and whisk you back in time. Enriched by its turbulent past, the capital of Sicily has multiple influences: Norman austerity, Byzantine refinement, Oriental charms, Italian imagination, French elegance and Spanish pride. A cultural patchwork that will make your Nice Palermo flight the start of a great journey. 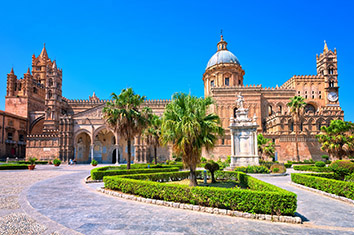 What to do in
Palermo ?

The city’s only nickname already promises a wonderful holiday. What is it? The happy city! And this happiness is nurtured by the unfailing sunshine that lights up even the narrowest of alleys in the old town, drying the laundry that hangs in the windows and caressing the green plants that brighten the balconies. The azure skies are perfect for strolling slowly around a city in the midst of a revival, which is modernised and safe, but still beautiful.