Fly from Nice to Saint Petersburg

For a century and a half Nice and St Petersburg have fostered a special relationship. In the time of the Tsar, the aristocracy of Russia preferred the shores of the Mediterranean to those of the Baltic Sea for their winter getaways. Back then it took weeks to cross Europe. Today, you can fly between Nice and Saint Petersburg in under 4 hours, and Russians aren’t the only ones making the trip. Locals of the French Riviera are enticed by the splendours of the ancient imperial city of St Petersburg, and by the State Hermitage, the second largest art museum in the world. 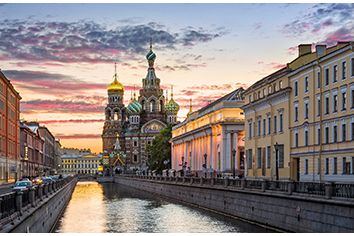 What to do in
Saint Petersburg ?

St Petersburg has long been an imperial capital, and it shows. With its prestigious palaces, flamboyant churches, private mansions, and underground stations that rival those in Moscow, the local patrimony is simply breath-taking. As is the atmosphere you’ll find there. Stylish on the Perspective Nevski, the Champs-Elysées of Russia, where you’ll find all the major designers, it turns romantic as you stroll along the countless canals spanned by over 300 bridges, giving the city a Venetian air.

FLIGHTS SIBERIAN AIRLINES
2
Flights per week, From June to September