Fly from Nice to Cagliari

Flying to the Sardinia capital

A flight from Nice to Cagliari is like stepping out of one paradise and into another. The proof: angels watch over both cities, those of Nice’s Bay of Angels and those of Sardinia’s Golfo degli Angeli. However, the colours and scents of Eden differ on the two sides of the Mediterranean. In barely more than an hour, your Nice-Cagliari flight will take you to another world, to a city and an island with a strong identity, to an adventure that combines nature and culture. 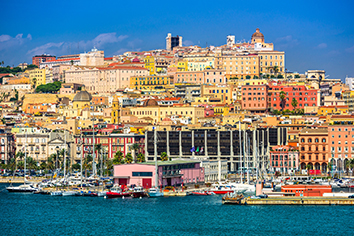 What to do in
Cagliari ?

Although it is in the south of Sardinia, with its sunshine and proximity to the Mediterranean, Cagliari is not really a fashionable seaside resort. With its population of 150,000 people, it is a prosperous city with a prestigious past and a lively everyday life all year round. This only makes the city more attractive, as it offers a warm, colourful welcome to visitors. To make the most of it, get lost in the little streets of the Castello neighbourhood, browse around the market, sit on a café terrace listening to older people speaking the local dialect, or blend in with the locals on the sands of Poetto beach.