Fly from Nice to Athens

To see the sunset over the Acropolis

Take off to the Acropolis

Nice-Athens: humans have been travelling between these two cities for over 2000 years. The capital of the Côte d’Azur was founded by Greeks, who came from the city of Phocaea. At this time, they crossed the Mediterranean in galleys: a long and perilous voyage. Today, a direct Nice-Athens flight takes just 2h25. A short hop that takes you back 25 centuries, in the footsteps of the fathers of our civilisation: Plato, Socrates, Pericles… Their memory lives on in the old stones of the Agora and the exhibits of the National Archaeological Museum. Your Nice-Athens ticket offers you much more than just a journey: it is a kind of homecoming. 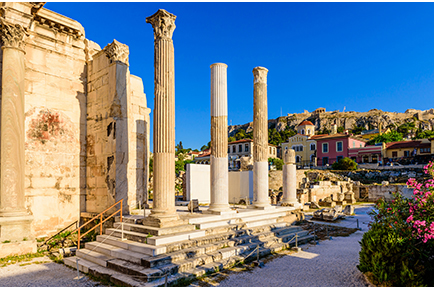 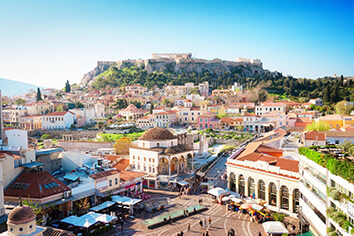 What to do in
Athènes ?

Every day, Athens is recovering more and more from the terrible financial crisis that shook the entire country. The Greek capital is moving forwards again, and it’s back to its fun, party-loving self. A symbol of this revival was the opening in June 2016 of the Stavros Niarchos Foundation Cultural Centre, a cultural complex designed by architect Renzo Piano, who also created the Pompidou Centre. Once again, visitors can see the city at its best: a modern yet picturesque city, keeper of the treasures of the most brilliant ancient civilisation.

FLIGHTS AEGEAN AVIATION
5
Flights per week, From April to October

FLIGHTS AIR FRANCE
4
Flights per week, From July to August