Fly from Nice to Tenerife

for a break in the sun in the Canary Islands

Fly to a place of eternal spring

At first glance, a Nice-Tenerife flight looks very much like a European flight between France and Spain. However, the Canary Islands are not like other Spanish islands. They live between two continents, at the same latitude as the Sahara, surrounded by the ocean and dominated by a volcano. The Canaries are like Europe in the Tropics, a wonderful blend that will make your Nice-Tenerife direct flight the start of a unique experience: a holiday of contrasts, between a pleasant climate and a harsh natural environment, between a relaxing break and days filled with discovery. 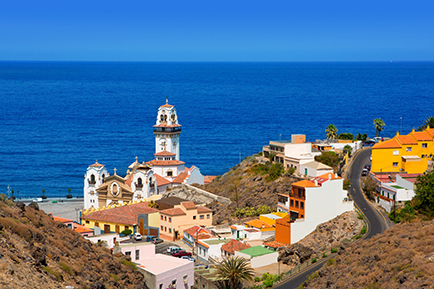 What to do in
Tenerife ?

The most heavily populated of the Canary Islands is also the most popular: every year, it is chosen by millions of holidaymakers. It owes this popularity to an irresistible cocktail of joie de vivre, nature and good weather. Tenerife is a breath of fresh air, a carefree land that is perfect if you need to relax and let go. The tourists don’t come here for fantastic museums or amazing monuments, but to get up close with the plants and animals, the beautiful landscapes, and the welcoming locals who love a party. Their simple charm really shines at meal times, when you can feast on their modest yet delicious cuisine.