Fly from Nice to Frankfurt

Fly to Frankfurt and the Main River

Nice Frankfurt. It resembles the first leg of a journey elsewhere, as Frankfurt am Main plays host to a particularly lively hub. But it can also be the starting point of a unique holiday, one that will allow you to discover a little-known city that’s at once charming, entertaining and seductive. So hop on a direct Nice Frankfurt flight and let yourself be carried away by the energy of this place nicknamed “Main Hatten”, which will surprise you as much with its small streets and taverns as with its glass towers and electro night clubs. 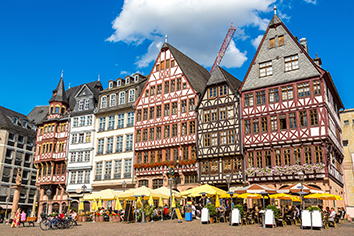 What to do in
Frankfurt ?

Like many German cities, Frankfurt suffered serious damage during WWII. It was able to get back on its feet, becoming the financial centre of the FRG, then of reunified Germany, building several skyscrapers to house the jewels of the national economy. This prosperity allowed Frankfurt to undertake major renovation work to recover some of its pre-war charm. Old quarters and some of the most beautiful streets were thus resurrected so that visitors could experience its charming and lasting beauty - beauty that inspired Germany’s greatest writer, Johann Wolfgang Goethe, and is sure to do the same for you.

FLIGHTS LUFTHANSA
10
Flights per week, From April to October