Fly from Nice to Bucharest

For a city break in Romania

By plane, it takes just under 2 hours 30 minutes to fly from Nice to Bucharest. That’s not much when you think about everything that awaits when you arrive: more than a century of history materialising before your eyes. Because the most Latin of Eastern cities tells a story through its streets and façades from long ago: a story of the happy times, when it was known and the “Paris of the Balkans”, but also the story of hard times, when communism and authoritarian leaders reigned. But fear not: a non-stop Nice to Bucharest flight won’t be just a long history lesson. Overflowing with life and pleasures, the Romanian capital offers a getaway that’s as exotic as it is enticing. 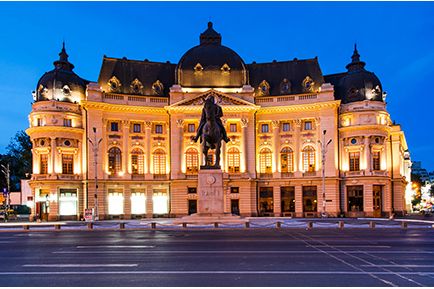 What to do in
Bucharest ?

Bucharest doesn’t claim the same sort of renown as other Eastern European capitals. Which is odd because it has two major perks the others don’t: it’s less expensive there, and when you take the time to get to know it, it’s just as alluring. There’s no hiding that the Ceausescu era of communism and dictatorship tarnished it a bit, erasing parts of its rich past. But the former city of Vlad the Impaler has been able to hold onto that special something that made it the Petite Paris of the Balkans. And it’s so dynamic! No doubt about it, Petite Paris by night is just as festive as its big sister!

FLIGHTS TAROM
2
Flights per week, From June to September

FLIGHTS WIZZ AIR
4
Flights per week, From April to October